Posted on October 11, 2019 by offthewagontasting

The day after Ukishima, our final day in Naha, and coincidentally, our final brewing in Asia, we stuffed our faces full of ramen at a nearby, hidden-gem, and hit up Helios Brewery and Distillery.  With the exception of some age-old Japanese whiskey (scotch) distilleries and the region’s traditional drinks (sake, soju, makgeolli, etc) the existence of craft breweries, distilleries, and wineries is relatively new on the Asian continent.  Not so in the case of Helios;  they’ve been pumping out high-quality spirits and seriously-sippable brews since 1961.

Of course, we had a beer flight, but before that, we split our standard ‘vacation drink’; a mojito, made with Helios’ silky-smooth, white rum.  The mojito wasn’t great; skimpy on the mint leaves and sugar, but the straight shot of rum afterward was full of that cane sugar sweetness you’d expect,  very well balanced, and without the smoky aftertaste. 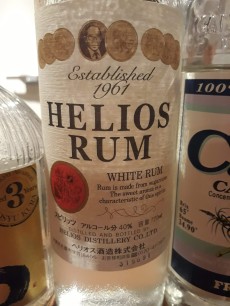 First up on the flight was Goya Dry.  Goya or “bitter melon” is all over Okinawa:  it’s in everything from breakfast to dinner, sodas, and even ice cream, and the native Okinawans attribute it to their high life expectancy rates.  What it did to the beer was add an intriguing champagne quality.  Think current brett-IPA trend without the hop characteristics.  It was really well done and actually left me with a lack of proper adjectives.  Imagine a cross between brut champagne, dry chardonnay, and crisp blonde ale.

Next on the list was a really bad porter.  I don’t know, sorry if you’re reading this, you’ve had it and you like it, the description says “mellow and drinkable”.  I got mellow and stinkable.

Finally, all was not lost, a special release called “Other Heaven” Red ale won the day.  Maybe after that porter, this one just wasn’t bad, but I choose to not be cynical.  Other Heaven was a great balance between sweet, caramelized malts, bitter hops, and a delightful cherry- toffee finish.  I’ve been lacking some good ambers in my life and this one truly hit the spot. 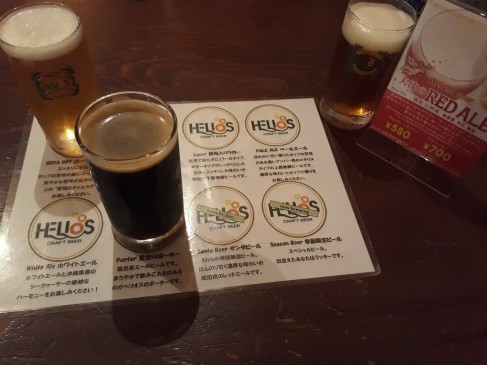 The rum was great, but the mojito was lacking, the 1st and last beers were great, but the porter was downright awful.  Maybe someone else might rate them slightly higher, but it’s tough to have one bad apple that is that bad of an apple, all in all, I give Helios Brewing and Distilling an 8.4 out of 10.